Originally Memorial day was known as Decoration Day and was observed on May 30th.  This was started in 1868 to honor those that died with flowers three years after the Civil War. After World War I the holiday was expanded to honor all of those that have died in all American wars. Along the way Decoration Day became Memorial Day and in 1971 it was declared a national holiday by Congress. At that time it was placed on the last Monday in May instead of May 30th.   (History of Memorial Day from the VA)

While reading about the history of Memorial day on the VA website I learned that in December 2000 a law was put in place called the The National Moment of Remembrance Act.act p.l. 106-579. The National Moment of Remembrance encourages all Americans to pause wherever they are at 3 p.m. local time on Memorial Day for a minute of silence to remember and honor those who have died in service to the nation.  If you are at a baseball game or official event everyone there should stop as well. As I Googled around about this law I found a speech from President William Clinton – Speech Link and a press release from the White House.

From the press release; Carmella LaSpada states: “It’s a way we can all help put the memorial back in Memorial Day.”  Part of the law was to create a commission to get the word out to encourage everyone to partake in the moment.  16 years later I am unable to find very much about the commission. Their website is no longer active and what I could find was in a library archive. What I did find  when I googled  National Moment of Remembrance 2016 was from the president’s  Memorial day proclamation speech. Asking everyone to take a moment of silence. 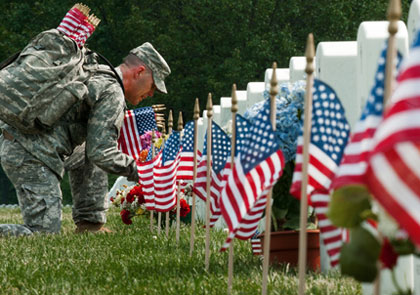 While for many memorial day is about kicking off the summer season and spending time outdoors, please take a minute at 3pm to remember those that gave their lives for our freedoms today. Please honor those that served our country and gave the ultimate sacrifice to preserve our way of life.

In researching and learning about the history of Memorial day, it made me think that   I need to do more to honor those that served our country. That while I am enjoying a three-day weekend I can do my part in honoring those that served.

This Memorial day I will be visiting Glacier National Park, thankful for those that fought to preserve beautiful sites in our country and sacrificed to preserve our freedoms so that we could enjoy them. I will  take a minute of silence to remember and honor those who have died in service to the nation at 3pm. Please join me on Memorial Day to participate in the National Moment of Remembrance.

Have a safe holiday, embrace our country’s history and honor our military servicemen and women.

"A ship in harbor is safe, but that is not what ships are built for. " John A. Shedd